Information and Exhibition Center of the Maidan Museum

Information and Exhibition Center of the Maidan Museum is a space where one can learn about preconditions and the course of the EuroMaidan, get information about the route of Revolution of the Dignity, order excursion, bring objects for the exhibition, leave your memories about the revolution, learn about activities of the National Memorial Complex of the Heroes of the Heavenly Hundred — Museum of the Revolution of the Dignity.

Infocenter is located on two floors of the new House of Trade Unions, on the total area of 120 m2.

On the first floor, there is a temporary exhibition "Towards the Freedom!". Visitors are fully immersed in the atmosphere of the actions on the Maidan by the help of the multimedia and through the stories of the visitors, which are being told in the audio.

On the second floor, visitors are able to go through the map of the Maidan, where key events of the Revolution, barricades and central buildings are shown. Historian Dmytro Vortman, the author of the map, was noting the ration between powers through the revolution, he was also noting placing of the power forces and protestors, placement of the barricades. In the information boxes, one can find a lot of materials about the history of the Maidan.

Soon there will be “topographical wall” formed out of plates with the names of the cities. Just like while the Maidan visitors can write the name of their city on the wall.

In 2019 info center will bring the project with the Virtual Reality that was liked by lots of visitors "Aftermath VR: EuroMaidan". While wearing the 3D-googles one will be able to transfer to the Instytutska Str. In February 2014. With the use of the 360-degree view one can get a feeling of being a part of the Revolution.

Ihor Poshyvailo, the General Director of the National Museum of the Revolution of the Dignity shares “We left the concrete slabs on purpose. We left the wooden beam that was burning. We left all the pieces of evidence of the history of this building. On the first floor, we are showing the history of the Maidan very laconically, we show some artifacts, some documents. On the second floor, we have some civil initiatives that were created during the Maidan".

On the second floor of the info center, there is also space created for the movies, presentations and other events.

Olha Salo, the author of the design of the Information and exhibition center of the Maidan Museum says "When we got such a small amount of space we wanted to make sure that it will equally interesting for those who know little about the Revolution and for those who took a part in it. On the first floor, we have chronicles of the Revolution. It has texts, pictures, archive materials and audio memories in it. There are also some unique objects from the exhibition on the Maidan Museum. Exposition of the second floor it is an ability to walk through the Maidan, see, where all the fights were happening, barricades and tents, key buildings were standing. Maybe, for some, it will be an ability to refresh their memories about the Revolution of Dignity. The second floor we will use for different events — presentations and watching movies. We see informational and exhibition centers as a welcoming space with active people and lots of events happening. While working on the design we made sure to make this center multifunctional. One of the expected results is to give visitors the understanding how important Revolution of the Dignity was. We also want to give the understanding of how sacral it is now to open the full Museum of the Maidan, which could fully talk about this topic".

According to the plan, after building the Museum, space in the House of Trade Unions will be used as an info center for the tourists in the Maidan Museum.

The entrance is always free.

Photo report from the opening of the Informational Center of the Maidan Museum. 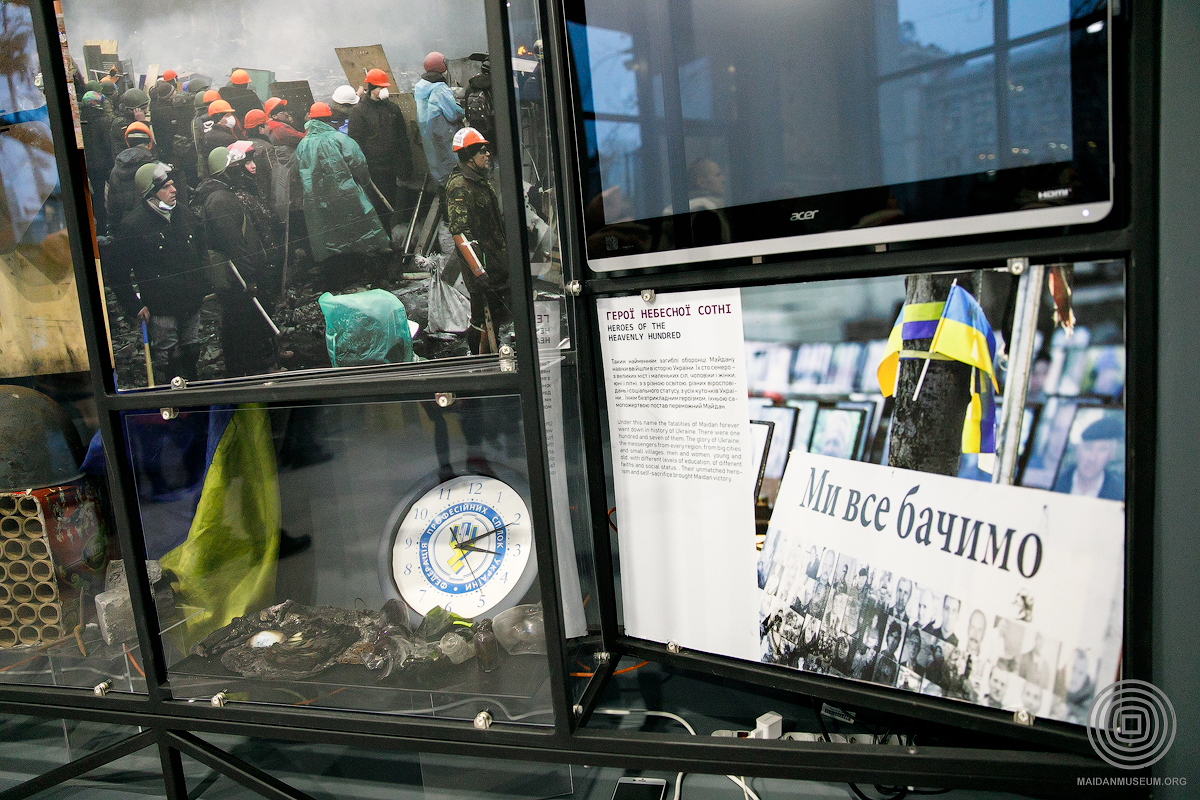